Political Assassination in Astrology by Birth Chart. We all know that the ultimate truth of life is death. The eternal truth of this world is life and death. The person who is born is sure to die one or a day. In Indian spirituality, Body is mortal, not soul. It has been said in the Shri Mad Bhagwat Gita —
वासांसि जीर्णानि यथा विहाय नवानि गृह्णाति नरोsपराणि।
तथा शरीराणि विहाय जीर्णान्यन्यानि संयाति नवानि देही।।
That is, the person, except the old clothes, takes on other new clothes, in the same way; the body goes away from the old body and goes into the new body. But this is a spiritual explanation. From birth to death, we consider our body to be everything. Therefore, on the day when the body gets dissolved in Panchatattav, we accept death.

Now question is that there are many types of death visible in the habitation of mortal, so how my death, it can be —

Now in this article, I am trying to analyze the horoscope of some of the main political personality who was assassinated. Why assassination happened an astrological analysis on the base of person Horoscope.

The 1st house and its lord are responsible for all type of events of the native. This house indicates the overall personality of the person.

2nd and 7th House and Lord

Both houses are the Marak house in the native Horoscope.

3rd house is 8th from the 8th house so it is also death house in the birth chart.

This is the most important house of death because this is the house of longevity, sudden death, and type of death.

This is the house of expense, loss, secret enemies, imprisonment and unseen troubles etc.

Role of Planets in Unnatural death

Mars and Rahu are planets of injury, arrogance, excitement, explosions and sudden events.

Saturn is the significator or death, For this reason, Shani is called “Yamraj. If Saturn is related to a bad house or planet in the birth chart, it becomes itself a dangerous for life.

Combinations of Houses and Houses Lords

Role of Planets aspect and conjunction

Timing of death or Assassination 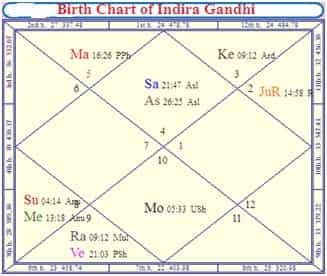 Mrs Gandhi is well known Prime Minister for hard decisions in the crucial span of time. Mrs Gandhi is Cancer ascendants native and Saturn is the malefic planets for cancer ascendant but the exchange between Saturn and Moon, this exchange gave prestige, dignity, respect to Indira Gandhi, but also created many problems.

When the major period of Saturn was started from Dec. 1970 she became Prime Minister of India. Saturn – Ketu period started from 1976 to 1977 she defeated in the election and lost her power & status in political life. She won the election to the Parliament and was sworn in as the PM in January 1980 in the Saturn-Venus period.

Mars is in the 8th house it indicates sudden death by the sharp weapon.  Ascendant lord Saturn placed in 7th house and hemmed by two fatal planets Mars and Ketu so ascendant.