Planetary Combination for Politics or Minister in Birth Chart . Why a lot of peoples are looking for career opportunities in the field of politics? Answer is very simple.  Now a day’s only politics is a such profession that is able to give you money, respect, fame, wealth, power and prosperity. We should never forget that it is easy to be a good politician. If you want to a successful politician then you have to need some special quality like communicative skill, good orator, domination, wisdom, leadership, courage, diplomatic vision etc.

This house is the key house for a anything because this house represent self .

This house represent speech or vani, a politician should have clarity in speech and a pleasantly impressive tone.

Fourth house represents people of the world so relation with this house is very necessary for any politician because when peoples will vote then a person become politician.

6th house represent competition, service, enemy, litigation etc.  all things are need to success in politics . If a person is  able to help others without self interest then the person will get name fame in society.

9th  house is the house of fortune.

Tenth house is the house of Karma (Career, Profession) ) in every individual horoscope. If the lord of the 10th house is exalted or if any planet in tenth house in exalted then it is easier for a person to connect himself from governance or politics.  It is also represent public fame, ruler ship and power due to this reason it has big role to achieve their goal.

Responsible Planets for success in politics

Sun, Jupiter, Saturn and Mars are the key planets in your horoscope for political career. These planets are very helpful for success in politics.

The Sun is the soul in astrology. Sun represent government,  administrative  power, Position in society and leadership quality in the native . If your Sun is exalted, placed in own house, trine quadrant  and create RAJYOG then Sun provide you respect, authority over others and reputation in the society. So if you want to become a politician then Sun should be in good position in horoscope. So sun is the most important planet for political career.

Moon means mind of the native . if your mind is strong then you can take any decision without any hesitation and this trait is necessary for success in politics.  Moon gives strength of mind so strong position of Moon in the birth chart gives the tendency of how to rule on people and collect more and more votes from them. Exalted  or own house Moon in Kendra or Trine is good for politics yoga.

Jupiter is the planet of Knowledge and wisdom. Jupiter provides reputation, goodwill, Justice and purity. Jupiter is Guru/Teacher guru provide sincerity in the politics. Jupiter is found strong in the horoscope of many notable political leaders.

Saturn represents the people of world. Saturn is the very favorable planet for politician because. Saturn represents, Justice, hard work, carefulness. Calmness and shrewdness, service to helping people, and connection with the general masses of the society. Saturn is the only planet that has the ability to change the fate of beggar to become a king and also vice-versa

Rahu is the planet of manipulation and this trait has a major role in politics  to be a good and successful politician.  Rahu  is the key planet for Politics. Rahu and ketu represent flag and  all politician work under any flag. They always put party flag on their car, house etc. so I think Rahu and ketu always live with politician.

There is too much astrological yoga available in horoscope but some yoga is very necessary for success in political arena.

Raja yoga play an important role in the life of persons. The lords of a Quadrant (Kendra) and Trine (trikon) house are in conjunction, mutually aspect or in reception. This is a combination of good fortune. Trikon house (1, 5, and 9) its house represent Lakshmi and Kendra (1, 4, 7 and 10) it represent Vishnu.

There is a relationship between the Lagan lord on the one hand and the 2nd, or 5th, or 9th or 11th lord on the other hand. The person will be wealthy.

The Jupiter and Moon are either conjunct, square or in opposition .The person is illustrious, overpowering, virtuous, wealthy, intelligent, and scholarly, of royal bearing and enjoys lasting fame.

Sun and Mercury are conjunct in the same house (also known as Budhadhiya Yoga).The person is sweet tongued, clever, scholarly, virtuous and will have learning, wealth, progeny and self-control, earns wealth by serving others. Also said to be highly intelligent, skillful in all works with a good reputation.

The 10th house from Lagan contains very strong Mercury devoid of a malefic aspect. The person’s fame is going to extend in various directions.

when the Moon and Mars in conjunction or aspect each other. Such person has manipulating quality. Such person manipulate even in worst situation.

Mars ( Ruchak Yoga), Mercury ( Bhadra Yoga), Jupiter ( Hansa Yoga), Venus ( Malavya Yoga) Saturn ( Shasya Yoga) any of one placed in own sign or in exaltation and in a Kendra for  this yoga .

If two or three planets are Vargottam then the native will success in politics.

Some important Ascendant and Planetary position

There are 12th sign in zodiac and all have own trait. Some sign are very favorable for success in politics.

Leo ascendant is also considered good for politics. Sun in 9th house, Moon in 10th house Mercury and Jupiter placed in 2nd house and malefic planets like Mars in 6th house Saturn in 11th house, while Rahu in 12th and ketu in 6th house give native political power and gets name and fame in political path. 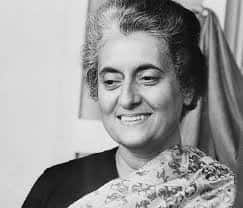 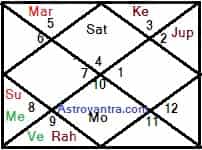 Above horoscope of Ex Prime Minister of India Smt. Indira Gandhi . The ascendant is Cancer aspected by its lord Moon from 7th house. The 6th and 9th lord Jupiter and 3rd and 12th lord Mercury are in Vargottama . There are three strong privartan yoga combinations available in Indira Gandhi Birth Chart.

Nakshtra Parivartan yoga is also available in this birth chart. Mercury and Saturn are in Nakshatra Parivartana each occupying the other’s constellation.

Rahu and ketu have also mutually exchanged their constellations.

Rahu placed in 6th house with lord of 4th and 11th house Venus. Rahu in 6th house itself good yoga for politics. If Rahu in the 6th house then Such person always ready to take action and never negotiates with unwanted situation. It’s also give fighting tendency to the native.

The native born under Cancer rising. It is also political Sign.