Krittika Nakshatra: First Pada Born Native Interpretation. The first pada of kritika constellation fall under Aries sign and the lord of the Aries sign is the Mars so that the person becomes very energetic and works as a commander in society or family. Sun is the ruler of this constellation. The Krittika born male person are generally of middle stature with the prominent nose and sympathetic eyes. He will have a commanding appearance.

Male native born under the first pada of Krittika nakshatra/ constellation is strong, with a healthy physique, established, keen to be educated, highly ambitious, always keen to progress further, skilled at warfare, competitive, related to competitions, skilled at arguing, clever, fond of leadership or possessing a powerful and authoritative personality, meditative, devoted to saints, ambitious to attain wealth, interested in disputes, famous, obedient in following rules and possessing a good appetite, infatuated by other women with an energetic and sharp personality.

According to Brihat Jataka- –
बहुभुक परदारस्तस्तेजस्वी कृत्तिकासु विख्यातः।
According to Maansagri- –
कृपणाः पापकर्मा च क्षुधातुरनित्यपीड़ितः।
अकर्मा कुरुते नित्यं कृत्तिकासम्भवो नरः।।
It means a person born under the Krittika Nakshatra is enlightened, famous, scholarly, educated and occupying a position of high authority. According to another viewpoint, the person may be ungrateful, miserly, hungry, lacking truth and wealth, infatuated with another woman, an aimless wanderer, harsh in speech, unhappy and involved in unrighteous deeds.

The female who has been born in the first pada of Krittika Nakshatra, therefore, the birth sign is Aries and the lord of the sign is Mars. Such native may create conflicts and confusion everywhere due to her angry temperament. She may have a feeling of detachment and be inimical and jealous of others. She may suffer from a cough, cold and other physical ailments.

In other words, she may always make efforts to earn a living, be fond of eating and cruel at times and polite at times. She may be miserly in her daily living and may be very attracted to the male society.

The native who born in the Krittika Nakshatra is considered to be in the Iron Paya which is inauspicious and harmful for wealth. Health The first pada of the Krittika nakshatra controls the head, eyes, mind, eyesight, cornea. Therefore ailments related to these may occur when afflicted by inauspicious or sinful planets. 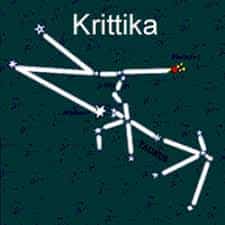 Lord of the Krittika Nakshatra is the Fire or Agni. He should be worshipped with white sandalwood, fragrance, Jasmine flowers, lamp filled with butter, incense sticks; sesame seeds etc., in order to appease him. Karpas Mool The Karpas Mool should be filled in a container and worn. Ghee (butter clarified by boiling and straining), sweets and kheer ( the sweet made of rice & milk) should be sacrificed. Mix sesame seeds and butter, ghee in the sacrificial mixture and recite the following 108 times

A person born in the Kshatriya caste is scholarly, brave, logical, pious, fond of stories of bravery, charitable and prudent.

A person born in the Rakshasa Gana is free from ailments, tremendously ugly, quarrelsome and a speaker of harsh and hurtful words.

A person born in the Mesha yoni is very enthusiastic, a great, warrior, valiant, wealthy and philanthropic. Marriage, friendship and partnership.

The people who born in the first pada of Krittika, people of Ashwini, pushya, third and fourth pada of Dhanishtha and Shatabhisha nakshatra are favourable for the native.