Abortion | Miscarriage combination in Birth Chart. Abortion or Miscarriage is not merely it is a common practice for any woman. Sometimes abortion is done on the advice of doctor but sometimes it is done intentionally only due to social and family compulsion. An astrologer can play an important role in preventing abortions because they can warn about the possibility of miscarriage on the basis of native horoscope. It is a big problem in our society due to this reason the Indian government has banned abortion. I am going to discuss abortion combination in the native birth chart.

Which House is Responsible for Abortion

5th house is the key house for progeny/abortion in every horoscope so if 5th House Lord is hemmed in between malefic (Saturn, Mars, Sun, Rahu, and Ketu) or afflicted by malefic planets.
9th house is also important for abortion because this house is 5th from the fifth house. If the 9th house and its lord are in affliction with malefic Planets.

Which planets are responsible for abortion.

Jupiter:  Jupiter is the significator of progeny if Jupiter is afflicted then abortion can possible.

Some astrological combination of abortion / Miscarriage

If two or three malefic planets (Mars, Saturn, and Rahu Ketu ) aspect on the 5th house or 5th lord, then a miscarriage is possible.

If 5th house lord in Trik Bhava (6th, 8th, and 12th) and conjunction or aspect by malefic planets, then abortion is possible.

If only Mars is aspect on 5th house or conjunction with the 5th lord in the birth chart then abortion becomes possible.

5th House has a malefic aspect of Saturn who is a strong malefic and lord of a maraka house.

5th House Lord is Mars which is debilitated and placed in duststhana along with a malefic with malefic aspects of Rahu, Saturn then a miscarriage is possible.

If a malefic planet is in the 5th house and 5th lord placed in the Shadashtak bhava with Jupiter.

If the significator of child Jupiter is placed in the shadashtak house and aspect on or hemmed with malefic planets, then abortion or no children yoga is possible.

If Saturn placed is in the house of 8th, 11th or 3rd house and Mars is in the 2nd, 10th or 11th house then abortion or dead child is possible.

If 6th, 8th and 12th lord are placed in the fifth house and any one or two malefic planets aspect on 5th house.

Fifth house lord placed in 6th, 8th and 12th house in D9 Chart and any one or two malefic planets aspect then abortion should be possible.

Horoscope of a ladies who get multiple Abortion 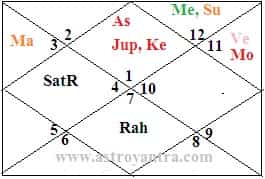 Above illustrated horoscope 5th house lord sun is in the 12th house with 6th lord Mercury. Mercury is a debilitated and 6th house Lord so that it is malefic planets.

Venus is a natural benefic planet but in this birth chart, Venus is the lord of Marak house 2nd and 7th so that which is a strong malefic and Venus is also an aspect of 5th house.

Malefic planet Ketu is also an aspect of 5th house.

5th House Lord is Sun which is placed in 12th house (Duststhan) along with a malefic house lord Mercury, here Mercury is debilitated so that which is strong malefic.

The malefic planet Saturn is also an aspect of significator of children Jupiter.

5th house lord Sun is debilitated in the D9 chart. Sun is placed in 6th house 6th lord Venus is also an aspect of 5th house lord sun from 12th house. it is also promising for abortion or miscarriage combination in the birth chart.

5th house and lord of this house Mercury are also under Rahu Ketu axis.

Malefic Planet Mars is placed in the 5th house.

Malefic planet Rahu is also an aspect of 5th house.

The malefic planet Saturn is retrograde so being retrograde Saturn aspect on 5th house lord.

5th house Lord of d1 chart Sun is placed in 8th house in the d7 chart.

She has suffered multiple of abortion and after getting a child miscarriage. Now she has a son but question is that why? The answer is also very clear Significator of children Jupiter placed in Kendra and aspect on the 5th house in D1 and D9 chart. Jupiter is only planets which bless children of the native.

The native should have consulted an astrologer before or after marriage and ask about abortion combination is available or not if yes then ask remedies of this problem. Example horoscope 5th house lord is in the 12th house with 6th house lord Mercury. As a remedy, the native should be under the guidance of Doctor. She should pour water to Surydev and feed green grass to the cow.